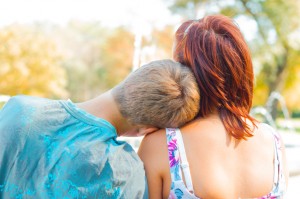 Recently I wrote an article for men, “How to Fix Her Problem in 5 Easy Steps”.  The response was positive.  While it didn’t go viral, I think it got the point across to some guys.  It did not occur to me to write a follow-up article for women, because it seems to me that females have us figured out!  However when asked by some folks (mostly women) if I could do a follow-up article for them, I thought I’d give it a try.

The first idea that occurred was the “Snap Out of It Approach” in the movie, Moonstruck.  In a confrontation with Ronny Cammareri (the brother of her fiancé) who has declared his love for her, Lorretta Castorini slaps him upside the head and says, “Snap out of it!” Of course, this solution did not fix his problem, it only made him more in love with her and her with him.  Slaps of any sort don’t solve problems, but usually create new ones so I would not advocate this approach.

Then there is the “Be the Neck Approach” in the movie, My Big Fat Greek Wedding.  Maria Portokalos is giving advice to her daughter Toula about how to handle a man. When her daughter complained that men are the head of the house, Maria said, “Let me tell you something Toula.  The man is the head but the woman is the neck.  And she can turn the head any way she wants.”The solution here is to plant the solution in his head in a subtle manner and let the man think the idea was his in the first place.

While a man wants his woman to think he knows everything (like assembling things without following instructions, or driving when he’s lost without asking for directions), the truth is occasionally we need a smack in the head (figuratively) or a turning of the neck.  It is hard for most guys to ask for help.  This is why most women take the lead in getting counseling.  Guys generally don’t take action until their woman has her bags backed or called her attorney.  Why?  Men hate to admit they have a problem.  Worse yet, is asking for help.

The challenge for most women in relationships is that guys don’t want to talk about their problems.  They prefer to work them out on their own.  Guys tend to compartmentalize things.  So, when they come home from work they don’t want to talk about their day.  Women on the other hand, find that talking about their day is a way to connect.  This situation creates competing agendas.  So, how does a woman help her man who comes home with problems on his mind?  Here are some basic steps.

Step 1: Give him some time to decompress.

For most men, the mental shift from work to home is difficult.  While we are good at compartmentalizing things we also have a tendency to process internally.  Work matters may remain on the internal grid without him talking about it.  Going from one arena of work (job) to another (home) is challenging.  Sometimes a few minutes of decompression can make the transition smoother. Greet him with some affection.  This makes him feel welcomed home.

Step 2: Take some time to decompress with him.

Guys like to connect with their woman but they don’t want to be inundated with too much dialog.  A casual conversation in a quiet area of the house for 10-15 minutes can work wonders on a guy’s stress level.  This might be more challenging when you have kids, but it is doable. Slowing things down a little when the workday ends and before evening activities begin gives you time to connect. Let the kids play in another room while the two of you take a little time for each other.  For more on this, read my article “Family on the Run or Family Having Fun?”

Since men tend to keep things on the inside try an indirect approach.  “You seem a bit stressed out.” (observation)  “Care to talk about it?” (inquiry)  This side-door approach is less intrusive to a man and may garner further dialog.

Step 4: Tune in to his frustration.

Men are not tuned into their deeper emotions.  Problems are more often expressed as frustrations.  Simply listening as he unloads his frustration gives him a release point.  Otherwise he keeps it on the inside and it leaks out in a bad attitude.

Step 5: Show him some support.

Two articles, five solutions to solve his or her problem.  Not too complicated huh?  The key is to slow things down and really listen to each other.  Most couples are too busy and this is complicates matters.  The most important piece of advice I can leave you with is to make time to connect.  Find pockets of time every day to have stress-relieving conversations.  Listen well.  Speak carefully.  Show appreciation.  It works.